Stick clips are amazing for climbers who don’t like breaking their ankles.

It’s safe to say, that there aren’t many climbers out there who do, so I’m going to assume you’re not one of them.

So, yes, you do need a stick clip.

This goes especially if you’re a newbie. Stick clips provide the protection you need to make it past the danger zone of the climb.

Until you’re clipped into a bolt high enough, you’re in the danger zone.

That’s right: It’s the very start of the climb that you’ve got to watch out for.

The reason? Your protection is useless until you’ve cleared a certain height.

This is usually the second bolt, but if a route has been bolted well then it’ll have a high enough first bolt.

Below that height, you’re not clear of the ground if you fall, even though it looks like you’re safe.

This is because you fall twice the distance between yourself and your last piece of protection, plus slack, plus a little bit of stretch.

Hmmmm. Now, if only you could clip into a high enough bolt before you start climbing…

The name “stick clip” is pretty fitting, although it sorta implies it’s for “clipping sticks,” or whatever that means.

It’s basically a long pole with a weirdly shaped thing on the end.

That “thing” on the end, is actually a really clever little device that lets you clip a quickdraw onto the first bolt that’s past the danger zone.

Some even allow you to unclip quickdraws, which, other than for cleaning the route, is particularly useful for a really sneaky application that I’ll be talking about later…

But first, I’m going to talk about the important stuff. The basics.

What Makes a Stick Clip Tick

There’s two parts to a stick clip: the stick, and the clip.

There’s a few different kinds of clip. Some are pretty simple, while others look like some kind of bizarre alien creature.

But let’s forget about all that for a second, and look at the “stick” part first, because there’s some important things that you need to consider when getting one.

Luckily, you don’t need some super special piece of gear for this. Stick clip devices are designed to fit any old painter pole.

However, I wouldn’t say that just any old painter pole will do. You’re going to need one which fits three key criteria:

1. It Should Be Long

A 16-foot pole is the perfect size for stick clipping. You can easily reach any bolt with that kind of reach.

2. It Should Be Telescoping

If you’re thinking of something like an old fashioned pirate telescope, then you’re on the right track.

A telescoping pole means that it can collapse back in on itself.

As you can imagine, hiking around with a 16-foot pole would be ridiculous. Get one that has at least one collapsible section, and you’ll have a handy 6′ or 8′ hiking stick for your travels, rather than some huge monstrosity.

Don’t get one of the ones which “fold” rather than “telescope” though. Those ones are an absolute pain to deal with, because they’re too bendy. Speaking of which…

3. It Should Be Rigid

This one is super important.

There’s nothing worse than trying to clip a quickdraw onto a small bolt hanger high above your head with a whimsy pole that just bends all over the place.

Get a rigid pole, and you’ll actually be able to handle it with some level of precision.

You don’t need a heavy duty one or anything. I’d actually avoid those simply because they’re heavy.

So, now that all that’s out of the way, let’s take a look at how stick clips work.

How to Stick Clip

Essentially, all stick clips are the same in the way which they work, but the Superclip is by far the best.

Why? Because it’s simpler, easier, far more durable than any other stick clip device out there. 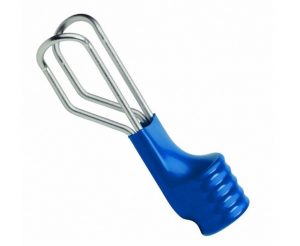 Naturally, people assume that a more complicated design would be better. You’ll often see people buy these kinds of stick clip, but then they always gravitate towards the Superclip in the end… because it’s just better.

Superclips have two prongs: One holds holds the carabiner in place, while the other holds its the gate open.

It doesn’t matter which way you put the carabiner in, because the prongs are symmetrical.

Only, make sure that you clip in so that when you get up there, you’ll be climbing away from the direction that the gate’s pointing in, if that’s at all possible. It means there’s less chance of the rope landing on the gate and unclipping itself when you fall, which is obviously bad news for your ankles.

Simply run your rope through the bottom carabiner of your quickdraw so that it’ll be running away from the wall and push the top carabiner down into the Superclip, so that it’s holding it from the bottom.

Now your stick clip is ready. All you have to do now is extend the pole out and hook your clipped-open carabiner on the bolt hanger.

Once it’s hooked on, you can pull down to let go of the quickdraw. It’s that easy.

If a quickdraw’s already up there and you just want to clip your rope in, then simply wedge a small bight (loop) of rope in the Superclip. It’ll hold it securely in place.

If your rope is really slim, you can loop one side of the rope around one of the Superclip’s prongs to make sure that the rope keeps in place.

This is pretty easy too, but the rope has to be running through the quickdraw for it to work.

This is because you’ll be pulling on both sides of the rope to keep the quickdraw still while you push your Superclip up the clipped-in carabiner to grab it.

It’s just like how you’d clip the carabiner into the Superclip normally, except this time you’re doing it something like 16 foot away. It’s actually far easier than it sounds.

If your quickdraw doesn’t have a rope clipped through it, then you’re out of luck…

Just kidding. Just clip your rope through it and proceed as normal. That’s all there is to it.

You can click here to view the Superclip on Amazon.

Don’t worry about the “professional version.” That’s for placing full-size locking carabiners, not quickdraws. You don’t need that.

Alright, now, let’s move onto that really sneaky use for stick clips that I hinted at earlier.

A Sneaky Extra Use for Your Stick Clip

Any climber who also likes a bit of bouldering will love this.

Essentially, you can stick clips to climb above your grade for a bit of extra fun.

Simply take it with you up the climb, and keep clipping the next bolt ahead of you.

If you can’t make it any further, then just use your stick clip to retrieve your gear. It’s that easy.

Sure, some might say that this is cheating, but I’d say it’s something which allows you to explore your limits. It’s just like in bouldering, where you can give any grade a go without consequence.

Naturally, you’re going to need the most telescopic, compact pole you can find in order to do this. Climbing with a 6-foot or 8-foot pole attached to you isn’t exactly practical.

A shorter pole that collapses right down to about 2′ or 3′ is perfect for this, but keep in mind that you won’t always be able to reach every bolt with it, which is why I recommended a 16-foot one for your standard stick clipping shenanigans.