Portaledges are great. I mean, sure, they’re practical for big wall climbs, but I love them in particular because it gives you a chance to relax and take in the breathtaking view that’s always behind you when you’re climbing.

As climbers, we spend far more time facing the rock than we do facing away from it, but a portaledge gives you the chance to actually chill out, take your time and enjoy the whole big wall experience, rather than just press on with shorter climbs and try to cram your climbing into the daylight hours you have left before you retreat to your van or your tent.

However, I’ve got to admit, portaledges are pretty darn scary when you’re not used to them. I mean, I don’t sleep as easily when camping out as I do when at home, but there’s just something about being unconscious while teetering over the edge of a death drop that just takes a lot of getting used to.

Though, like all things, you do get used to it, and with portaledges, you start to love it. In the end, you’ll prefer them to normal tents. That’s for sure.

Think of a nicely stabilized hammock. That’s how it feels. It’s not swingy like a hammock is, and the floor itself is somewhat rigid, but not actually “hard.”

It’s just like having a nice hammock-y kind of support beneath you. They’re actually super comfortable. Because they move much less than hammocks do, you might find it easier to sleep in one of these than in a hammock unless you like the idea of rocking yourself to sleep or something.

Well, you could always rock the portaledge. If you get a really bombproof one like the one I’m about to show you, then it can easily take it.

Just make sure, whatever you do, you buy a fly with it as well if you’re bringing snacks, flasks or anything else that isn’t tied on. You don’t want stuff falling off and smacking unsuspecting climbers on the head down below.

The fly also really helps for any unexpected weather during the night. Not all flies are completely waterproof. Many have webbing on the outside that wick moisture into the fly, which makes it not a particularly nice experience to be trapped inside during wet weather.

Also, a fly can be a very effective windbreak, and it’ll stop pesky bugs from biting you in the night too. Though, there’ll naturally be less bugs high up in the first place. Still, they’re pretty universally useful, and they’re not just for wet weather like you’d expect. I find it much easier to sleep in a portaledge that has a fly, because you feel less exposed to that death drop right in front of you.

“But if you’re in a fly, you’ll miss out on that gorgeous view you were talking about earlier.”

To an extent that’s true, but that’s why you put the fly on before you’re about to go to sleep. Let’s face it, you’re not going to be seeing much of anything when it’s dark, and you’re going to be preoccupied with getting enough rest to take on the next pitch at the break of dawn.

Besides, the portaledge that I’m about to show you has a window.

Anyway, let’s get right to it. 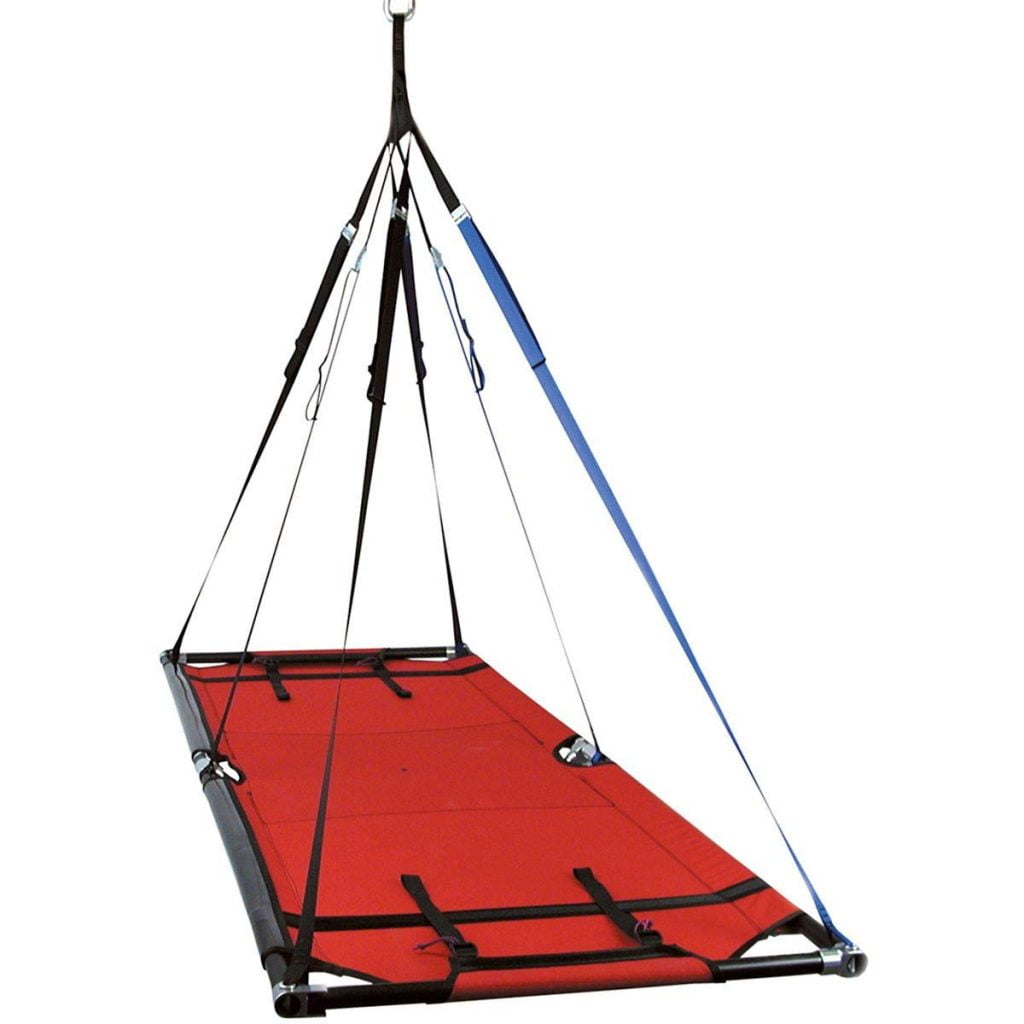 This thing is crazy strong.

It’s both stronger and lighter than other portaledges such as Black Diamond’s one… and that really makes the difference.

Think about it. You want your gear to be as light as possible. I mean, you probably already try to save weight on your gear wherever you can.

However, having a portaledge is going to add a fair bit of weight by itself, so naturally you’re going to want to go for the lightest one possible.

Then again, it’s not the best idea to go for a flimsy portaledge just for the sake of save weight and space. It has to actually be strong enough and stable enough to fulfill its purpose.

Fortunately, you don’t actually have to compromise.

You’re honestly not going to find anything stronger or lighter than that.

“What about the actual bed part?”

Well, it’s made from heavy duty 960/1080d Montana Polyester, which is doubled up in the high-stress center section, and the wall side has an abrasion guard made of Durathane haul bag material.

The portaledge weighs 11 lbs 7 oz, which is a whopping 23% lighter than Black Diamond’s one. That’s a significant difference… especially considering that it’s also stronger.

Oh, and the Metolius Bomb Shelter comes with a Durathane haul sack which weighs only 1 lb 5 oz.

The spreader bar is pretty neat. You don’t end up messing around trying to get it to fit like you do with practically every other portaledge. You can actually set it up by yourself. That just shows how much better the design is to the comparatively “messier” designs out there, like Black Diamond’s one which is known for being a bit of a pain to set up.

You can click here to view the Metolius Bomb Shelter portaledge on Amazon.

“Anyway, what about the fly?” 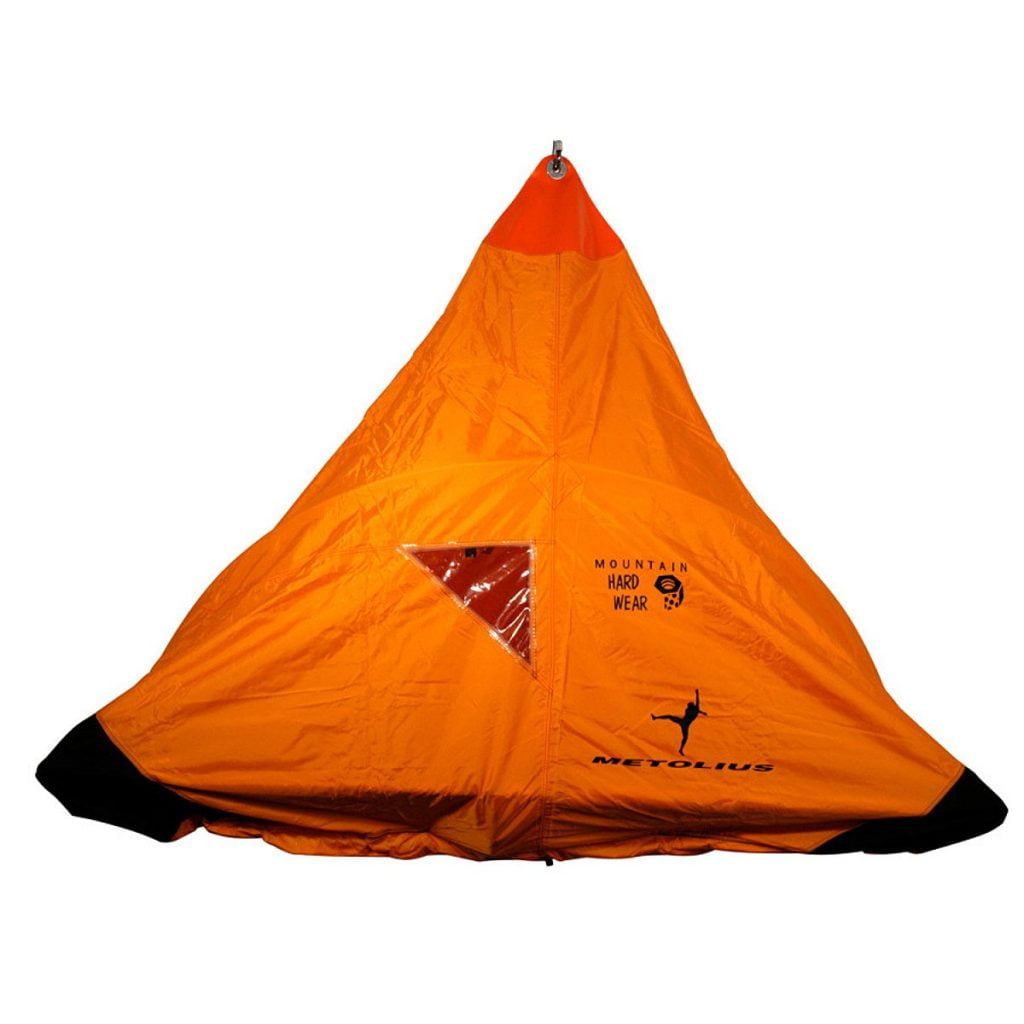 This thing made from polyurethane-coated 420d Oxford, and all the seams are hot taped.

A heavy-duty, Jr. Ballistics abrasion skirt protects the area on the fly that’s in contact with the wall, and all four corners are double reinforced with Durathane haul bag material, just like the wall-side abrasion guard on the portaledge itself.

The clip-in point is also made of that same aircraft quality 6061-T6 aluminum as the ledge is, and it has 3 plates with 4 through-bolts to securely anchor and seal the fabric.

This thing is absolutely leak proof, and, like I mentioned earlier, there’s no webbing to wick moisture into the fly, so you’ll stay dry even if there’s heavy rain or stormy weather. General humidity won’t ever be an issue either.

The fly weighs 6 lbs 5 oz, and comes with an integrated, compression stuff sack. You can click here to view it on Amazon.