So, chalk is used in multiple sports to help you perform as best as possible.

Chalk, or as it’s known by the science types “magnesium carbonate MgCO3” is great for all climbers, as it allows you to keep your hands dry as well as improve your grip on the rock or climbing hold.

The problem that most people have is that there are tons of different brands out there! With so many choices, which ones are right for you?

Chalk can come in a few different forms. You have liquid chalk, powder chalk, and blocks of chalk. I’m mainly going to be talking about the powdered form, which is the most common. 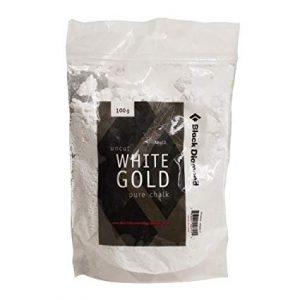 Black Diamond is a household name in climbing they have been around since the 1950s.

They make everything from carabiners, belays, rope and pretty much any bit of climbing kit you can think of. This, of course, includes chalk.

Black Diamond’s answer to the sweaty palms issue that plagues the climbing community is white gold.

This chalk is pretty loose without too many nuggets, usually supplied in a resealable packet which makes sure white gold is not a high chalknado risk for your backpack.

Most buyers state this chalk is “what you see is what you get” and are pretty happy with the lack of larger chunks.

If you prefer mostly powdered chalk this is probably the brand for you.

So the friction labs animal series is one of my favorite ranges of chalks due to its diversity.

The animal series covers pretty much every type of powdered chalk you could possibly want.

This chalk is for those of you that like to grab and crush big chunks of chalk instead of having a bag of full powder.

The Bam Bam still comes with a little bit of powder chalk but it is mainly fleshed out with the larger chunks.

I really like the packaging of the Friction Labs animal series it’s more interesting than your regular clear plastic bag that a lot of brands offer.

So the Gorilla Grip is a midway point between the Bam Bam and the finer Unicorn Dust.

It “marble sized nuggets” that are padded out with a healthy dose of loose chalk.

It also might be worth mentioning that Friction Labs boasts the highest magnesium purity on the market.

However, this has been disputed by a few skeptical buyers and it’s been said that all magnesium carbonate is created equally.

So Unicorn Dust is exactly like you would imagine.

It’s mostly just chalk in its powdered form however you do get some small chunks here and there.

The Friction Labs climbing chalk is endorsed by a ton of pros so that might be why it’s so popular, or it might just be good chalk? 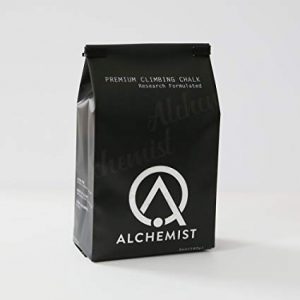 So the Alchemist climbing chalk is where “climbing and science collide” now while it may sound like a low budget sci-fi its actually a pretty cool concept.

A youth climbing team coach who earned his PhD in biomedical engineering decided to specifically formulate chalk for better performance.

The idea behind this is that everyone has different skin compositions and baseline moisture levels in their hands.

I completely agree with this and think it’s great someone has decided to base chalk on it, I have rather sweaty hands while my girlfriend’s remain bone dry even on tiny crimpers and risky slab. Having a chalk that can work for both of us is great!

I really like the design on the bag for the Alchemist chalk I think its really sleek and has a sort of modern gothic vibe.

Another thing to note that might sway you towards trying the Alchemist is they are a member of 1% for the planet, this is where a company donates 1% of annual sales to environmental causes. 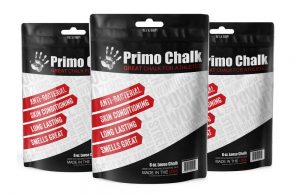 So Primo Chalk decided to walk a different path to the others.

Instead of going the route of pure magnesium carbonate, they have made the choice to mix in some essential oils and Epsom salt to mix up the classic formula.

Not following the norm has worked out great for Primo and has turned them into one of the more popular chalk brands.

Most people seem to love the lemony scent the chalk has from the oils and the fact it seems to last a lot longer than most other chalks on the market.

The dislikes, however, are the price tag, but if you want a premium product it doesn’t come cheap! 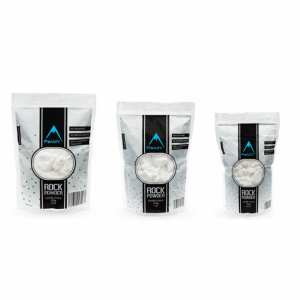 So this last one is a chalk I have yet to try but heard pretty good things about the chalk bags so I thought I would throw it in.

The Psychi chalk is a pure magnesium carbonate and has no drying agents, unlike some chalks. It’s mentioned on their website is that it can help reduce calluses, which can be a plus for some people who want to keep their delicate hand.

Most reviews mention its “an affordable chalk with decent performance”
so it might be a mid-range option for those of you that don’t want to splurge for the “premium” brands. I use that term pretty loosely and I think chalk preference is mostly a personal thing due to everyone having different hand moisture levels.