Okay, the first thing that you should know is that there’s nothing crazy that’ll be expected of you on first time.

Honestly, don’t worry. The staff at your local indoor bouldering place will be lovely, accommodating people that’ll help you out with anything you need to know.

However, it’s nice to know before you go isn’t it? So let’s sort out all the questions you have about starting bouldering once and for all.

First of all, let’s start with the burning question:

What Do I Need To Bring?

You’ll need to wear gym clothing that lets you have a comfortably wide range of movement.

The reason for this is pretty straight forward. You can’t climb in tight fashion jeans or other restrictive clothing because climbing requires you to be able to move your arms and legs around all the time.

First of all, it’d get pretty tiring. Climbing is already a physically intense activity, and working against your own clothing is going to get in the way of your first time.

Secondly, when you fall, you’ll want to be able to land on your feet and bend your knees without any difficulty. Honestly: any difficulty in being able to do something like that just puts you at unnecessary risk for spraining an ankle or something.

Thirdly, you might actually damage your clothes if you make sudden movements in restrictive clothing. There’s also the chalk. You’ll get your clothes absolutely covered in it.

Basically, It’ll work out cheaper in the end to just get some suitable clothing.

Here’s what I suggest:

Notice how I left shoes off there? That’s because you’re going to need to hire climbing shoes when you get there.

No, normal shoes won’t do. Climbing shoes are completely different. You wouldn’t want to walk around in them in daily life.

If you want to get your own pair, either to save money or to get something nicer than rentals, then take a look at this guide to the different types of climbing shoes.

Also, for those on a tight budget, I wrote a guide to spending as little money as possible with your starter bouldering gear here.

However, if you want something absolutely top end, like, what the best climbers in the world use for bouldering, then take a look here instead. 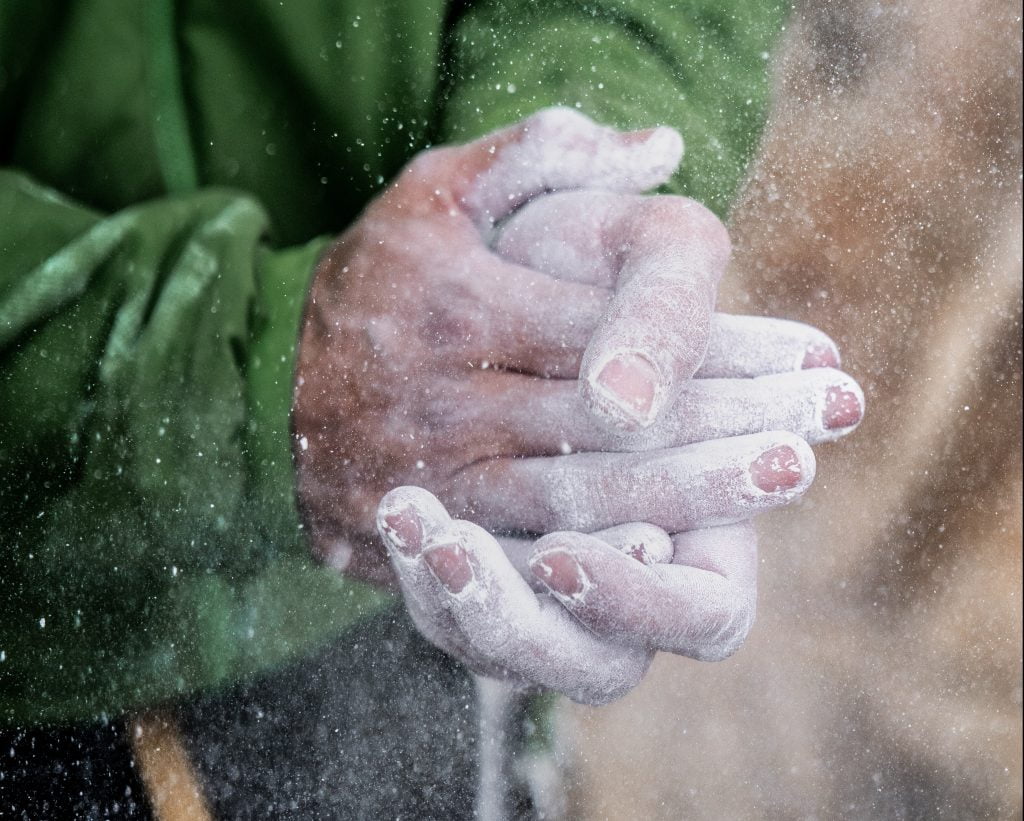 You’ll absolutely need some. You can’t climb without it.

If your local bouldering place doesn’t rent out chalk, then you can certainly buy some, but it’ll probably be cheaper online. Here‘s the chalk ball I recommended in that “climbing on a budget” article I mentioned earlier.

However, if you want to get some standard equipment rather than make-do with using a chalk ball in the resealable ziploc bag it comes in, then get Black Diamond’s loose chalk, which is great value for money, and a chalk bag.

Whichever option you go for, just be sure to dust your hands with chalk regularly, and don’t worry about spilling a bit on the floor mats. It’s all expected.

Well, that’s it. That’s all you need to bring with you. Let’s move on to the next question.

What Should I Start With?

When you’re starting out in bouldering, you’re not going to tackle the high grade routes. That even goes for heavy gym goers, because climbing uses all the muscles, tendons and ligaments that you don’t use in the gym.

Besides, the higher grades require holding onto such tiny holds that you’ll think that they’re impossible until someone else comes along and does it like it’s nothing. That’s what bouldering is like.

But you know what? That’s completely expected. This isn’t like the gym where you get small ego-battles around the bench press.

Start with the easiest routes.

To find them, take a look at the color coded charts that are dotted around the place. It’ll tell you which color holds belong to which difficulty.

Then, of course, remember what color the easiest one is, and go do all of them.

At my local bouldering gym, green is the easiest. If you’re doing a route that’s colored green, it means that you’re not allowed to use holds of any other color. That’s how indoor climbing works.

You might see big blocky shaped jutting out of the wall that make it look less flat and more like an actual rock face. By all means use those. They’re called “volumes.”

Just don’t use any holds of the wrong color that are on those volumes, because that’d be cheating.

Oh, and try to start with your hands on the clearly labeled holds, in a sitting position with your feet off the ground, resting on the little holds of your route that are down below, right by the floor. If that’s too hard, you can skip it at the start, but that’s the way it’s meant to be done.

Of course, when you’re done with the entry-level routes, then move on up the colors. It’ll get much harder after a couple levels, but don’t worry, the routes will reset each week, so you’ll have a fresh set to try next time if you run out of the ones that you can manage.

Just don’t overdo it on your first time. I tore the skin on my hands to shreds by doing routes that were above what my poor hands were used to. That was only because I was slipping off constantly, grating my hands each time.

Your hands will be fine afterwards if you don’t go crazy like I did, but if you do, then make sure to use a lot of chalk. It’ll help protect your hands and stop you slipping off the trickier holds.

What if I Fall?

Oh, you will fall.

And that’s not a problem.

As soon as you walk in, you’ll notice that the floor is absolutely lined with bouldering mats.

These things are amazing. They’ll break your fall perfectly as long as you remember to land on your feet and bend your knees.

The first time you fall? Yeah, it’s scary, but when you land you’re like, “Oh, that was nothing.”

You basically had more chance of hurting yourself when climbing in the local playpark as a kid.

Generally, you’ll want to climb down from the top of each route if you can.

What Do I Do When I Reach the Top?

To complete a route, you’ll need to be able to place both hands on the highest hold of the colored route you’re taking, without cheating by using any other colors.

Once you’re done, climb down using any colors you like. The downclimb is just about getting down so you can collapse on the bouldering mats a safe distance away from the wall and have a rest.

What Are the Basic Safety Precautions?

What’s the Most Important Piece of Advice?

No really, go wild. You’ll soon be completely in the state of flow, the hours will just fly by.

The greatest thing about bouldering is that it’s basically the only socially acceptable way to climb around as an adult like you did in playparks as a kid.

Take advantage of that… because very other climber at the place will be!