Don’t get me wrong, top roping is far more ideal for newbies, casual climbers and people who can’t take big falls for whatever reason.

However, if you’re not one of those people, then you might be surprised to find out how fun lead climbing really is. I’d say it’s more fun than top roping, for both yourself and others too.

Here’s a stream of consciousness of my thoughts on it.

1. The “Climbing On Rails” Feeling

I’ve always seen top rope climbing as “climbing on rails,” compared to the sensation you get when lead climbing, looking up without seeing a rope leading right up to the top.

I know it’s just a perception thing, but I can’t help but feel that when top roping, you’re having to pretend that the rope isn’t there. Otherwise, you could literally just use the rope and your belayer to aid climb your way to the top.

2. You Can’t Use Half Ropes

Another big problem is that you can’t use half ropes on a top rope climb.

“Why would that matter?” you’re no doubt thinking.

That is to say, reducing rope drag serves a grander purpose.

It enables you to take on the more interesting climbs out there, without any drawbacks.

Lead climbing is great, and half ropes make it even greater. They take the true strength of lead climbing – the ability to take on those really complex and wandering routes – and enable you to take it to its absolute limit.

It’s also why I love bouldering. There’s a strange synergy between the mind-tasking nature of bouldering problems and the deeply strategic nature of lead climbing. 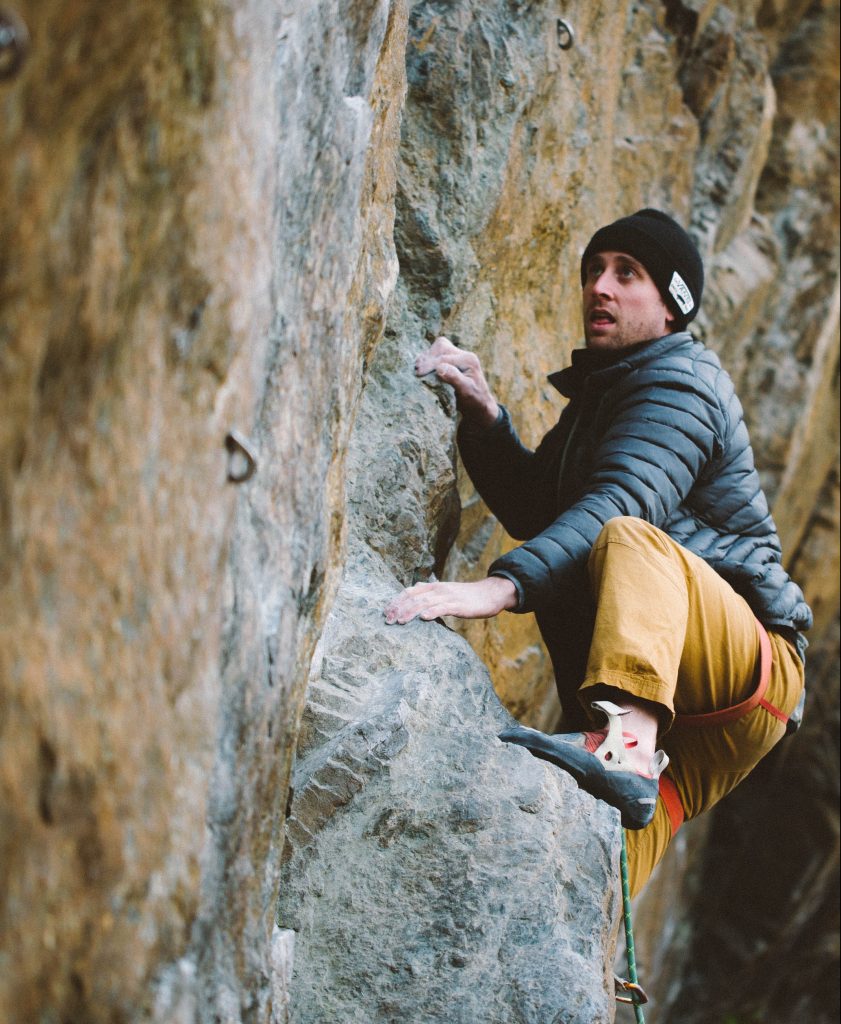 Those twisting and winding climbs are rope drag magnets with how much they wander left and right. Half ropes turn them into a dream.

Top roping is quite limited in that respect. You’re mostly tied to a central line, and wandering routes would end up pretty dangerous if you fell, because you’d swing right across the rock during the fall. Ouch.

3. You Miss Some Moves

Another drawback of top roping is that you skip all the bolts.

Most would see this as simply convenient, but if you look at activity of lead climbing as a whole, clipping in is just another part of it.

Balancing yourself while delicately and smoothly clipping a quickdraw into the bolt, and then slipping a rope into it, all while not falling is a fun little challenge in itself.

Yes, you could say that free soloing skips this too, but free soloing is a whole other ballpark that I’m too scared to do. Bouldering is enough for me for that kind of experience.

And yes, I guess it applies to bouldering too, but I’ve always felt that bouldering is more about demolishing problems and enjoying taking on the moves themselves, rather than “making a climb” as if you’re on a mission to the top.

Time after time again, you’ll see top ropers climbing at a grade way out of their depth, scrambling up the route with a tight rope hoisting them up.

They ascend the route like they’re an astronaut in zero gravity, pulling themselves along as if the route were the corridors of a space station.

And there’s nothing wrong with that. It’s like bouldering above your grade. There’s no better way to push yourself.

However, it can end up being a bad habit for sure, because I sure know that I relied on that kind of climbing too much when I was a beginner.

If any of you play video games, then I feel like this kind of climbing is like “save scumming.” We’re all guilty of it, I know.

However, if you don’t play video games and have no idea what that means, then forget I said anything and move on. 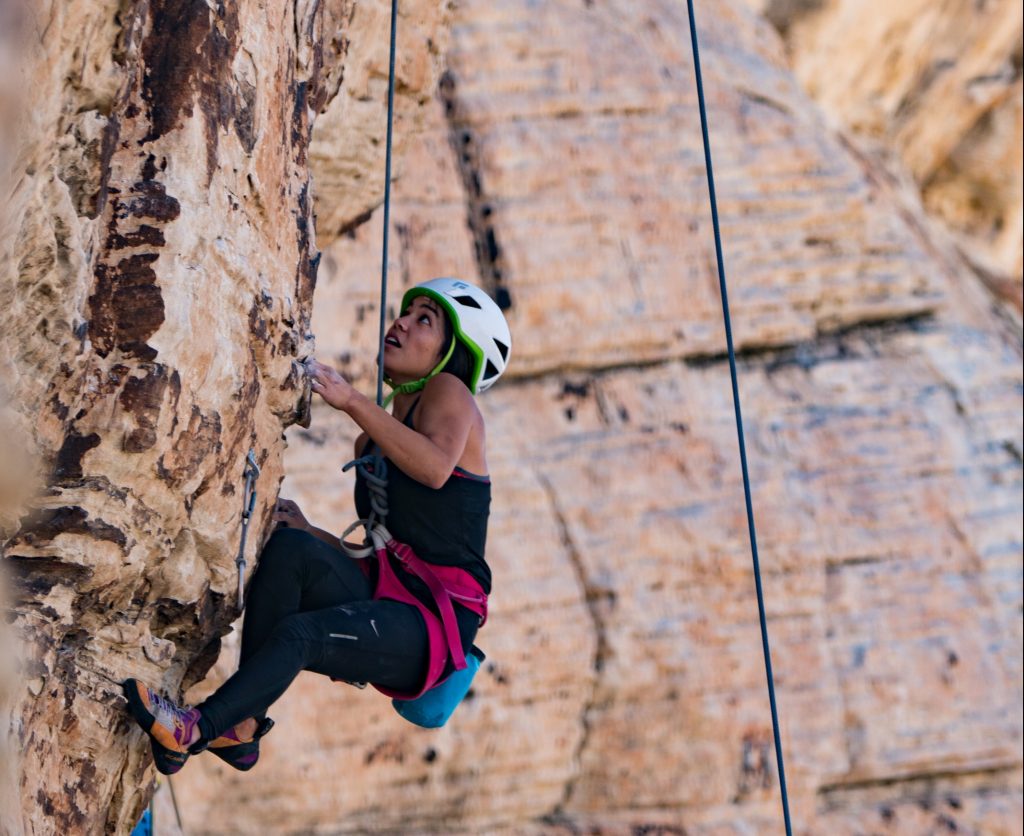 5. Setting Up a Top Rope Can Be Annoying

The problem here is the sheer amount of time and effort it takes to set up, for how little you get out of it.

With lead climbing, you just walk to the climb, get on belay, and climb.

And that even goes for when you don’t have to set up your own anchor.

First of all, you have to hike all the way to the top of the climb.

Sometimes, this is impossible. Other times, it’s easy.

Once you’ve had the pleasure of hiking all the way to the top of the climb, you have set up an equalized top anchor.

You’re going to have to to scout around for suitable objects to build one off, because it’s not quite as straightforward as throwing a sling around a rock and calling it done.

You’ll need at least three sturdy rocks to create an equalized anchor off. If there’s a good strong tree then you could always use that, but it’ll eventually kill the tree if enough top ropers do the same.

Once the equalized anchor’s set up, you have to rig the rope and toss both ends down to your friend, at which point you have hike all the way back down again before you can start climbing.

Now that everything’s finally set up and you’re both in position, you get to climb a short, single pitch route before you get to take everything down again, which means – yep, you guessed it – another hike all the way back down. Fantastic. 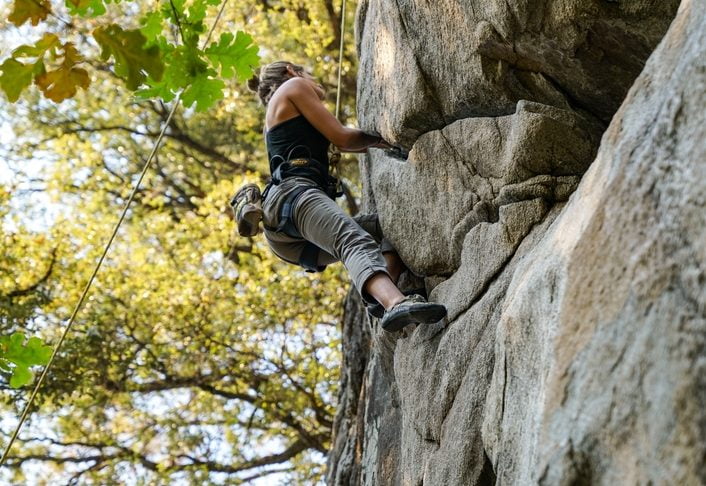 Because it’s such a pain to deal with all this hassle of setting things up only and taking them down again, many top ropers end up becoming route hoggers, trying to get as much as they possibly can out of their setup before they eventually take it down.

There’s a lot of hostility towards them for this reason. They’ll set up their top rope on a popular crag, leave their top rope up while they eat lunch, and continue to block everyone else from leading the route until they finally decide to pack up a few hours later.

Of course, this is entirely avoidable with a little bit of common courtesy.

It’s not so much a problem with top roping itself, it’s just a by-product of the increased set up time being a bit of a pain if you’re setting up top ropes day-in, day-out.

That being said, when top ropers are being complained about as route hoggers, it’s quite often just because they’re newbies. Newbies are not too familiar with crag etiquette, so it’s a bit harsh to blame them for it.

If you’ve been waiting for a while for some “route hoggers” to finish up, go and politely talk to them, without complaining, and tell them you’d like to have a turn on the route. Climbers are good people. You’ll see.